Today we’re going to be summarising the Schwinn Continental Commuter Road Bike Review is a quick and easy to read micro review.

Schwinn bikes are known for its quality and value. Could the Schwinn Continental Commuter 7 Speed 700C Wheel Bicycle for men be one of them?

If youâ€™re looking for a 27-inchÂ hybrid mountain bikeÂ for men, this Schwinn Continental Commuter bike could be one of your best options. Read on to find out if it fulfills all your requirements. 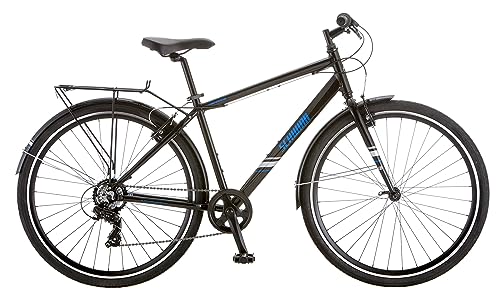 This Schwinn Continental Commuter is a very nice looking bicycle by Pacific Cycle.
Buy From Amazon.com

The Schwinn Continental Commuter 7 Speed 700C Wheel Bicycle is built on a lightweight aluminum alloy frame and suspension fork. Unlike hybrid bikes with a steel frame, like theÂ Retrospec Beaumont-7 Seven Speed Menâ€™s Urban City Bike, an aluminum bike frame doesnâ€™t rust, so you have one less thing to worry about.

The top tube of the frame is similar to a mountain bike frame. Itâ€™s sloped downwards towards the seat tube, which removes the obsession on having more clearance over the top tube.

This has 700c wheels (approximately 27.5 inches in diameter). The front wheel comes with a quick-release lever to keep it in place.

The biggest advantage of having a quick-release wheel is you donâ€™t need to bring any tools to remove it and fix a flat. You can also prevent it from being stolen and allows you to put the bike into your car.

Bicycles with more gears, like the 21-speedÂ Schwinn Menâ€™s Siro Hybrid Bicycle, obviously have a wider range of gear combinations to offer for various terrains. But, a 7-speed bike isnâ€™t a bad choice, especially if youâ€™re only going to ride on paved streets.

This Schwinn hybrid bike is equipped Shimanoâ€™s twist shifter on the right handlebar and rear derailleur. These components allow you to switch from one gear to another with precision and control as you ride over bumps, climb up hills, and other difficulties.

Schwinn created the Continental Commuter 7 Speed 700C Wheel Bicycle with your safety in mind. Thatâ€™s why theyâ€™ve came up with the SURESTOP brake systemâ€”to stop accidents in their tracks and for effortless braking.

Hereâ€™s what the SURESTOP braking system is all about:

This is probably one of the best reasons to get this Schwinn Continental bike. The seat is really comfortable, which is something youâ€™ll need for long rides.

Itâ€™s not as strong as bikes made of steel or carbon fiber, but itâ€™s good enough for an aluminum bike at this price range. Itâ€™s strong enough to support probably around 250 lbs to 330 lbs of rider and cargo weight.

We wonâ€™t take this off-road or racing, though. As far as its bike frame material goes, an aluminum bike like this one isnâ€™t the easiest to repair. If you really want a more durable bike, make sure itâ€™s made of titanium, carbon fiber, or steel.

The downward angle of the top tube makes it easier to mount and dismount. You also donâ€™t have to get so preoccupied about getting the right inseam measurement.

This is a large bike thatâ€™s geared more towards male riders. If youâ€™re a female rider, the 7-speedÂ Schwinn Wayfarer 700c Womenâ€™s Hybrid BikeÂ with a step-through frame could be a better fit for you.

With the Schwinn Continental Commuter 7 Speed 700C Wheel Bicycle, you can deal with hilly and flat city streets with the same efficiency. Get yours today!

Instructions Not Specific to This Bike

The instructions that come with this bike is practically useless because theyâ€™re not specific to this model and use a lot of foreign language. So, expect to spend a lot of time figuring out which instructions refer to this model.

On top of that, it doesnâ€™t include tools that are needed to assemble this. Some of the tools youâ€™ll need are a hex key set (small) and open-end wrench (for the pedals). Youâ€™ll also need a bicycle-specific mechanicâ€™s lubricant and grease for the metal parts.

If you donâ€™t have the patience or know-how on bike repairs, itâ€™s best to let the professionals assemble this to save time.

This thing weighs more than 40 lbs. Not light at all. So, itâ€™s difficult to carry, wonâ€™t turn corners that fast, and could burn through the brake pads and tires faster.

The brakes arenâ€™t adjusted right out of the box. Since theyâ€™re not the types of brakes that you commonly find in most bikes, you could spend way too much time figuring out how to adjust them.

Who Is It For?

As what we mentioned, the size and geometry of this bike is specific to male riders. Itâ€™s built for the paved roads of city or town, not for gravel roads or soft grounds. Itâ€™s for people who want to get fit, relax by taking leisure rides, and just enough gears to combat hills and flat, paved grounds equally well.

The Schwinn Continental Commuter 7 Speed 700C Wheel Bicycle usually rides well, shifts smoothly, and has a very comfy saddle. It has a few drawbacks, but nothing too serious that you want to return it (which could be a hassle). We wouldnâ€™t recommend using this for off-road riding, racing, or long-distance commutes, though.

Now weâ€™re in the realm of road bike royalty when looking for the best road bikes under $2000. Seriously, with a budget of ...

Best Road Bikes Under $1000 - Overview Looking for road bikes with a budget of $1000 comes with its own headaches. Road bikes can c...

With a budget of $500 itâ€™s possible to find a good road bike that will hopefully last several years and need minimum maintenance due to itâ...