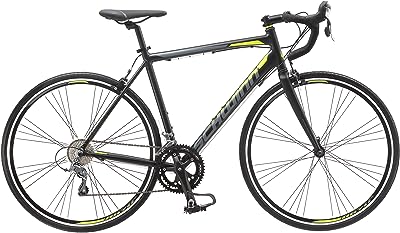 The Phocus 1600’s frame is made from aluminum, and offers an appropriate amount of rigidness and response that is noticeable when pedaling and steering. It has an overall weight of 26 lbs when fully equippe, which isn’t exactly low, but still acceptable for its range. A carbon front fork helps to alleviate shock, while also helping to cut the weight down.

The Phocus 1600’s drivetrain is comprised of Shimano parts, and gives you 14 separate speeds, more than enough to offer enough options for inclines, declines, and flat terrain. Shifting is very crisp after an initial tune-up, and is accomplished by using Microshift integrated brake levers.

As for the Schwinn Phocus 1600 Drop Bar Road Bike’s brakes, they are just a little soft, and require a small amount of added pressure when using the included Promax alloy calipers. Some actually prefer a soft braking system, but if you don’t you’ll likely want to upgrade the pads for a small price.

The Phocus 1600 comes with high-profile alloy wheels that have 32 holes, and a paired spoke pattern in groups of four for better rim support and aerodynamics. Kenda K-196 tires are surprisingly responsive, and have a light tread for better grip and shock absorption.

Extra features include toe clips, helping maximize pedal efficiency for those who might not want to use clipless pedals. The light blue and white color pattern is very appealing as well, and looks very sharp out on the road.

The Schwinn Phocus 1600 Drop Bar Road Bike Has Featured In The Following Guides...