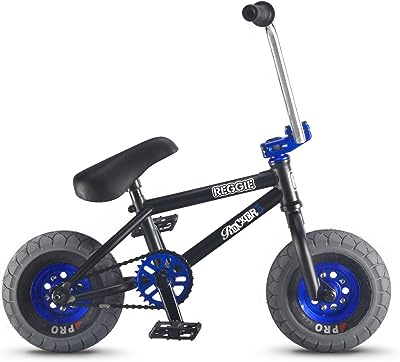 This bike is the second Reggie influenced design on our list. We didn’t feel that putting two in the podium would be fair as the main difference is the colour scheme. However it’s well worth considering the REGGIE Rocker BLACK Mini BMX  version if you’re in the market for a top of the line mini BMX bike.

Reggie Deacon is the best mini BMX rider in the world, as anyone interested in mini BMX knows. Reggie has been riding for Rocker for a several of years and has been fundamental in the uprising of Mini BMX enthusiasts across the globe. The REGGIE Rocker series is dedicated to him and revolves around his custom preferences when it comes to Mini BMX riding. These machines are build for serious ‘street heads’ who want the best equipment to enhance their experience.

The REGGIE Rocker BLACK Mini BMX is part of the REGGIE Rocker Series. The REGGIE Rocker Series feature Reggie’s own geometry when it comes to the size and design of the frame and components. The main frame is chunky and solid which lends to the idea this bike is built to take a beating. It comes in a black finish and is broken up only by the logos stamped in 3 locations. The saddle that comes with this model is a standard black colour and is adjustable for optimal comfort. Matching the saddle and frame in black are the standard Rocker BMX pedals, bike chain and soft Kraton hand grips on either side of chrome handle bars. The forged top loaded stem, chain ring and wheels are a very nice deep metallic blue. The Reggie Rocker also comes with Rocker plastic pegs in black allowing the rider to conduct even more tricks with this bike.

As with all Rockers this bike has no brakes! It is sold for off-road use only. It is specifically designed for off-road racing on enclosed tracks on private property. It is NOT to be used on the highway or sidewalk.

The Reggie RockerBLACK Mini BMX comes with high performance aftermarket Rocker Street Pro Tyres. These allow up to 80 psi (according to Rocker BMX themselves) and will offer the rider a better experience in terms of grip, traction and ride comfort. These tyres are issued in the black and match several components attached to the main frame including the saddle and hand grips. The tyre walls are also black and feature the Rocker BMX ‘PRO’ text to highlight the quality of the tyres.

These bikes ride really well. Very straight with virtually zero wheel wobble even at very high speeds. This bike is designed for trick and can deliver everything that a full custom 20* BMX can deliver. It’s one of two signature models for the professional rider Reggie Deacon who rides for Rocker BMX.

This bike is as good as Mini BMX’s get. Its technical design in to match Reggie Deacon’s setup & looks the part. The bike is primarily dark colours with most of the frame and components being finished in black. The stand out components (the forged top loaded stem, chain ring and wheels) are in a lovely metallic blue and stand out nicely due to the rest of the bikes subtle styling. A great example of how the Rocker Mini BMX design team don’t need to go loud and in your face to come out with a bike that is full of character and stylish charm.