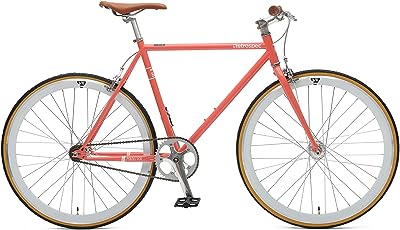 The Retrospec Mantra V2 has a steel frame that’s capable of supporting up to 250 pounds of rider weight. It has TIG-welded joints, which are strong and aesthetically pleasing.

The diamond-shaped frame may not be female-friendly (difficult to lift leg over the top tube), but it’s becoming more popular with women who want to deviate from the norm. This type of frame design is suitable for urban riding. Not to mention, its sporty, retro design is eye-catching.

Equipped with an alloy riser handlebar with Kraton rubber grips, you can enjoy your rides while being seated firmly and comfortably on a classic brown saddle. This bike can also barspin, while making sure you won’t hit your foot while turning the front wheel.

he Retrospec Mantra V2 Urban Commuter Bike has a double-sided hub, also called a flip-flop hub. In that way, you can use the bike as a fixie or a single-speed, depending on your riding style.

What’s the major difference between a single-speed bike and a fixie?

For those who don’t know, a fixie or fixed-gear bike is direct drive. Meaning, when you pedal forward, the wheels also roll forward. This eliminates the need for brakes because you can use your legs to stop or slow down the bike.

Meanwhile, a single-speed bicycle uses a rear flip-flop hub or double-sided hub, which lets you switch between fixed-gear and single-speed. A fixed gear allows riders to stop pedaling and freely coast, thus requiring brakes. (The Retrospec Mantra V2 has front and rear V-brakes from Promax.)

The Retrospec Mantra V2 Urban Commuter Bike is for people who want to try riding a fixie, but don’t to spend big on a fixie with suspension fork or better components. Hobby cyclists, recreational bicycle riders, and daily commuters could also use this to cruise around areas with almost no hills.

Most people find the Retrospec Mantra V2 Urban Commuter Bike as a road-worthy commuter bike for a budget-friendly price. With just a few upgrades and tweaking, you’ve got a bike that could offer years of service. In general, it’s a fun and decent bike for a good price.