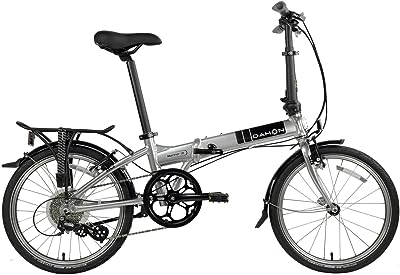 The Dahon Mariner Folding Bicycle 20in wheels give a ride that’s rather more like a full-sized bike than a folder. You’re not going to mistake the Qix for a carbon race bike, but the larger wheels, especially up front, make it a bit smoother on potholed streets. To be fair, Brompton does a good job of protecting your bum from road bumps with a rubber rear suspension bumper that also contributes to its diddy fold.

When folded, it’s still small enough to go in the lower luggage spot of most trains, and it’s not in the way if you stand it in the vestibule area. It’s also nicely balanced for short carries; you just grab the back of the saddle and away you go. Admittedly, you wouldn’t want to lug it too far, but lifting it on the train or into the back of a car is fuss-free.

A rack, mudguards and a kickstand are welcome features; I don’t believe a commuter bike deserves the name unless it has at least the first two. The rack comes with a luggage elastic, which is handy for your U-lock. There’s also a chainring guard to stop the transmission eating your trousers. All that’s missing is built-in lighting, but Dahon only seems to offer that on e-bikes, which is a pity.

The Dahon Mariner has a tight, accurate ride thanks to the stiffness that comes from its oversized main frame member and fat handlebar stem and seatpost. Its handling is definitely on the quick side. It responds instantly to every movement of the handlebar. That’s great for dodging potholes, but it can get a little fatiguing on longer rides.

Dahon has done a good job with the Mariner. It rides well and folds easily to a usefully compact package. It has a reassuring feel of both quality and solidity, as well as handling that’s just right for dashing round town. The few component compromises can be forgiven in a folder at this price.